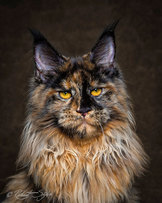 From the forthcoming anthology FROM A CAT'S VIEW

​NICE WORK IF YOU CAN GET IT
Maine Coon photo copyright Robert Sijka
The neighbor's pit bull is not your pony.
If I had thumbs, I would gladly have spent an afternoon's detention writing that phrase on a blackboard. Unfortunately, I am not even a mitten paw. I am one of the largest domestic cats in the world. Almost as big as the neighbor's mutt.
Which no doubt embarrassed the neighbor, who was also an attorney. No doubt there was copious use of the L word.
Litigation. Humans, it seems, are even more competitive about territory than tomcats. A piece of prime Manhattan real estate, once occupied, is not to be surrendered over a trivial matter.
The matter wasn't trivial to me. It had to do with the food chain, and one's hierarchy upon it. I was acquired because Bleach-Blonde thought she'd seen a rat. After two years of mind-numbing confinement in her luxury condo, I hadn't battled anything larger than the occasional cockroach. Not much in the way of sport for a cat like me. On the other hand, the neighbor's pit bull promised a great deal of sport. Not to mention I felt the mutt owed me.
I could hear the beast through the walls, whining for attention, snoring, and most annoying to me, the click of its toenails going past my door. That damn dog got to go for romps in the park, when all I could do was sit in the window and watch. There came a miraculous evening when Bleach-Blonde was coming in just as the beast was being taken out.
The neighbor stopped in the hallway to chat. Bleach-Blonde stood there on her ridiculous high heels, holding the door open, giving me plenty of time to determine the rules of engagement with the slobbering beast.
Rule number one - there are no rules.
I crouched, tail waving. An obvious warning, but the humans weren't paying attention.
The flag is up, and ... we're off!