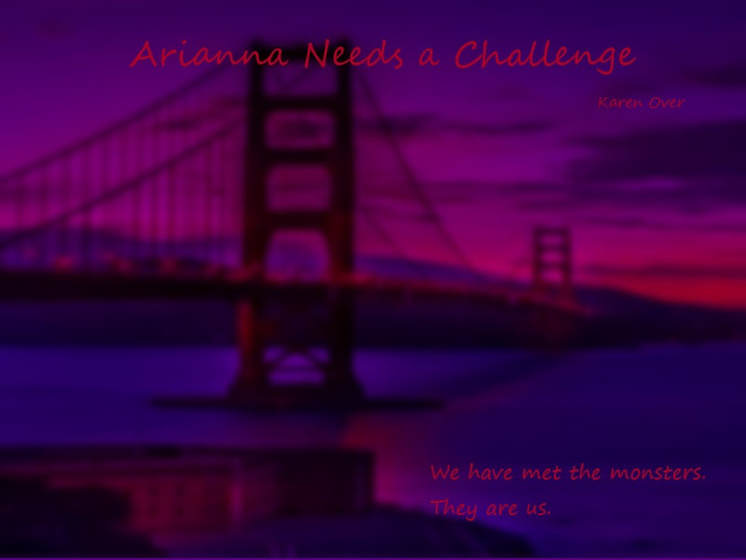 Arianna Brown awoke on Halloween and dressed in her professional attire. She did not add strange ears or a stringy wig. Yesterday a coworker had offered her a witch's hat.
"Totally matches your outfit. You'll be so cool."
Arianna hadn't gotten the joke. Not outwardly, not in front of the others. Now, however, staring at her stark reflection, she felt a twinge of resentment. Smoothing the lapels of her black suit jacket, Arianna announced today's challenge to herself.
"I will get inside that house and I will get that old woman into a proper facility."
Arianna thrived on challenges. Getting the best grades. Getting accepted to UC Berkeley and keeping that GPA. Getting her master's degree was a big one. That took her much longer than expected. As an undergrad she went home to Nebraska every summer to be with her parents. Her first master's thesis was killed by her adviser before she even started. Then her first completed thesis was rejected. She changed advisers, but that didn't help. She caved and wrote a thesis she didn't believe in. The faculty loved it, giving Arianna her first taste of culture shock. She counted it as useful for her new job, having landed an entry level position with Health and Human Services in San Francisco.
Big city social service was her dream challenge. So many people needing help, and so few willing to accept it, or even acknowledge their need. Arianna had been working hard for nearly four years, but her supervisors always found fault. They told her the clients she was trying to bring in more often than not complained she was harassing them.
This was horribly frustrating. She'd expected a promotion by now. Even worse, she was only allowed one week of paid vacation during the summer, which wasn't enough to go home for a visit unless she flew. Spending money on a plane ticket was not something her thrifty parents would understand.
Unless it was Christmas. Arianna flew home for the holidays, leaving on Christmas Eve and returning on New Year's Day. She had to book her flight months in advance to keep the cost down, save all her personal days and hope she didn't need a sick day.
Her parents didn't understand that, either. Didn't understand why the office didn't just shut down during the holidays.
"Because those are often the most difficult times for some of our clients," Arianna tried to explain. "I'll get back to the office and find a heap of work. The holidays always produce red flags when it comes to abuse and neglect."
Dad would shake his head, and Mom would sigh.
"You just keep saving all those poor children, Arianna. You're doing the Lord's work. But honey, don't you think it's time to start thinking about a family of your own?"
Of course it was time, Arianna thought as she joined the stream of traffic on the Bay Bridge. It was beyond time. She dreamed of a white wedding in the little church where she'd been baptized. She'd met some ideal prospects, men who came very close to meeting her criteria for a husband and father. Then she would start talking about Nebraska, and the night would end early. None of them passed that final test. She was about to turn thirty, and would once again go home for Christmas without a fiance.
And not tell her parents she hadn't worked a juvenile case since getting the agency sued for harassment during her first six months on the job. It might be legal in California for two homosexuals to adopt a child, but Arianna would never believe it was right. She still had a hard time believing the agency actually encouraged such adoptions, and even recruited such people to be foster parents.
They told her she was lucky to be keeping her job. Arianna didn't believe that was right, either.
She'd been shuffled through the agency ever since, finally ending up with welfare checks on the elderly. Nevertheless, Arianna rose to the challenge.
Well, it wasn't as if she hadn't known San Francisco was short on morals.
So many old people needed saving from their greedy young relatives, or even from themselves. This was the challenge which kept her going. So today she would drive through the imposing front gates of that big house on that high hill, and rescue Lili Anne Carstairs.


Lili Anne Carstairs awoke to the soft light of dawn filtering through the dove gray curtains of her bedroom. She loved this time of morning, especially in the fall, listening to the house come awake. She'd recently celebrated her seventy-fifth birthday, and the family had gone all out. Tonight, however, was the night she'd been looking forward to all year.
Halloween.
Across the hall, her married nephews stirred. Jace was the adopted son of her brother. Miki was the youngest of Uncle Nigel's nephews. They'd each found a home, and each other, here in Carstairs House. Lili Anne would see to it that they kept their rightful places as patriarchs in the family.
As for who would be Master of Carstairs House after Lili Anne, that honor was likely to go to Ryan, her sister's son.
A kettle sang, downstairs in the kitchen, signaling the start of the day. Uncle Jason had once ruled the kitchen. Now Miki, a journalist, worked from home and relished doing all the cooking. For Halloween breakfast he'd be down there doing a proper full English, to fortify the family for the long day and night ahead.
Like Bilbo Baggins, Lili Anne wanted to put a sign on the front gates. No Admittance Except on Party Business. But the gates were pretty good at stopping unwanted interlopers, sticking firmly shut at the slightest suggestion of hostility. She rose out of bed with a chuckle, for no one had ever solved the puzzle of how the gates worked.
Sitting at the head of the dining table, tucking into a breakfast that would have horrified her doctor, Lili Anne felt the temper of the house change. Heads raised, all around the table, looking to her.
The gates slammed shut. The holly prickles on the hedge all turned outward. Tumblers fell into place in the door locks.
Lili Anne took a deep breath and gazed into the dark surface of her morning tea. In the space of a few heartbeats, she knew all she needed to know about Arianna Brown and her mission of misguided mercy.
Willow also looked up from her tea. "She can't do that, Aunt Lili! Dad, this has got to be illegal."
Ryan looked to his aunt. His Sight was not as strong as his daughter's, but he knew something was up. Lili Anne laid it out to the gathered family.
"It would seem I've come to the attention of a professional meddler. Sometime today we can expect a visit from a Miss Arianna Brown, from Health and Human Services. I doubt they know she's coming. She thinks she's going to keep you lot from ruining my golden years. What she's really doing is indulging in a fit of spite, though she'll never acknowledge such a thing. A good Christian woman, she thinks she is."
Lili Anne held up a calming hand as a collective groan went round the table. "Now, now, there is just as much room in Creation for the misguided as there is for the likes of us. For all we know, none of us has got it quite right. So we shall give the young lady not only the benefit of doubt, but the benefit of all that Carstairs House is capable of bestowing upon her."
"What are you up to, Aunt Lili?" Miki asked, exchanging looks with his husband. "Just turn the woman away, or better yet, let Ryan deal with her. He's your lawyer, after all."
"In the first place, it is Halloween, and I shall take whatever the day brings me. In the second, she won't believe Ryan. By now she'll have dug up that he's legally changed his name to Carstairs, and she believes he's a con man because she doesn't realize he's swapped his father's surname for his mother's. Last but not least, my dears, where would be the fun in hiding behind the gates? Come now, you know that won't work."
The mood relaxed, but not the vigilance. Smiles replaced the concern, though the house refused to relent. Lili Anne outlined her plan, enlisting the aid of those most involved with the annual bonfire. Slowly, the house adapted its defenses to fit the spirit of the night.